The husband and I stopped in Chippewa Falls, Wisconsin, which was right on our drive from Wausau to Minneapolis. Chippewa Falls is home to the third largest craft brewery, Leinenkugel’s, so it was a must to stop and see what they had to offer! We had a 15 minute wait for the next tour, which worked out perfect. We checked out The Leine’s Lodge, which got us really excited for the tasting after the tour.

The Leinenkugel’s tour is about 45 minutes – 1 hour, featuring the brew house and all the goodness that goes into a Leine’s Lager. Our tour guide was a sweet girl from Withee, WI, a small town that supplies all the honey for Leinenkugel’s beers! Honeyweiss & Sunset Wheat are two of my personal favorites that get a dose of honey! Yes, I bought a bottle of that proprietary honey to bring home to Texas!

During the tour I did learn about Jacob Leinenkugel’s yeast. He brought it all the way from Germany to Chippewa Falls, which is still the same strand used today to make many of the Leinenkugel’s lagers. The yeast used is a bottom-fermenting yeast, one of the two types of yeast used in brewing. Bottom-fermenting yeast works well at low temperatures and ferments more sugars, leaving a crisp, clean taste and then settles to the bottom of the tank. In contrast to the lager is the ale, which is a top-fermenting yeast and works better with warmer temperatures. Interesting? I thought so. Both beers taste great to me!

After our tour, we were invited inside to sample 5 different Leinekugel’s creations. They also had a menu of “leine’s mixers”, which mixed beers together to make for some interesting combinations, like honey bear or pink lemonade! 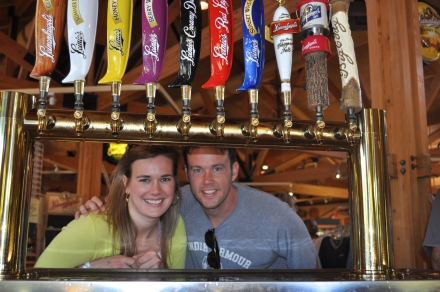 It was a fabulous break from driving, and a really relaxing tour. Plus, how can you go wrong with free beer?! 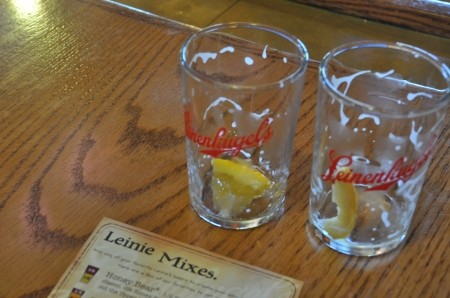 I bought two “taster” glasses; I think they’ll be perfect for a Bloody Mary chaser someday! For anyone that isn’t from Wisconsin, a small chaser of beer is ALWAYS part of your Bloody Mary order. I think this tradition should be extended into all states. On Wisconsin!

One thought on “leinenkugel’s”