Since having our dogs, I never thought twice about spending money on them. I would think long and hard if I was considering something for myself, but with our dogs it was another story. Otis our pug was referred to a dermatologist for his allergies. Before we knew it, he was getting patch tested and put on immune specific allergy shots, ketoconazole shampoo, and a strict rabbit formula diet. Because rabbits are less allergenic? I’m serious. Yes, it was expensive, but these were our babies and we want the best possible life for our K9 family!

That being said, that idea has now extended to our baby boy. I can see it already. While we were in the hospital, they had a photographer come in and take a couple pictures of him. It took all of 20 minutes to get him naked, prop him up on some white sheets, and the photographer to do her thing.

I thought to myself: I could do that at home. Don’t agree to the photos Sarah.

She then uploaded them and put them to some sentimental music and loving quotes on some generic PowerPoint deck, inevitably making me feel these days are fleeting and obligating me to buy the photos. I looked at the hubs and he knew all too well, regardless of what I said prior to the photographer coming into the room… we’re buying them. They are only that little once, right?

Don’t worry, I bought them without the cheesy backgrounds and music. I have some standards.

With that, I wanted to share some of the expensive 20 min photo shoot with you! Jack’s all but 3 days old here! He’s already changed so much. 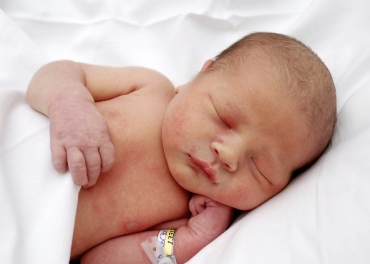 Maybe this will prepare me to saying “no” to the 96 count crayons and make Jack get the 24 count instead. Or the Air Jordan’s he’ll claim he needs to play basketball that much better.

… I’ll probably say yes to both. Because he’s worth it, the photos where worth it, and his mom’s a sucker for him already.